I went into early labor late on Saturday evening, March 8, 2014. I was having slightly painful contractions every 20-30 minutes. I managed to go to sleep that night, but was awoken a few times by the pain. Sunday the 9th, the contractions were getting pretty painful, so Tom and I went to the hospital. I was checked out and it was determined (after three frustrating hours) that I was not far enough along to be admitted. So we went home. I went to work on Monday the 10th and worked 7 of my 8 hour day with horrible back labor and contractions coming 8-10 minutes apart in the morning, then 5-7 minutes apart in the afternoon. My bosses sent me home. The pain was getting to be unbearable.

I called my doctor’s office to ask if we should go to the hospital, not wanting to be sent home again. They gave me the go-ahead. When the nurses checked me out in triage, they told me I hadn’t made any progress over the day. They told me to walk around the hospital for 2 hours. I was a bit livid and in WAY too much pain. It felt like my back was being burned from the inside out. Tom and I walked the halls downstairs for about an hour, taking breaks to go to the bathroom and stop when it hurt too much. We then snuck back into my triage room where we tried applying counter-pressure to alleviate the pain. It worked a couple times, and then just made everything worse. The nurse finally came in and checked me. I had progressed just a LITTLE bit, so she (without warning) swept my membranes and stretched me. Then she called my doctor and BOOM I was admitted. We had been at the hospital for about 3 hours at this point.

Once in my room, they put me in a lukewarm bath with jets. The jets made my back feel better but I couldn’t brace myself enough against the contractions. Then the nurse put me on a yoga ball, which made the pain even worse. I was a little difficult to deal with at this point. Not that I’d been a joy in the last few hours, but I was snapping at the nurses. I was checked again at about midnight on March 11th, her due date, to see if I could have an epidural. Thank goodness, I had made enough progress. I got it at about 1am and became the sweetest, happiest woman on Earth. I tried to sleep, but it wasn’t going well because the nurse had to do her job and check on me. By 5am, we were fully dilated and I pushed a couple of times. My water hadn’t broken, so the doctor came in and did that for me about 5:15. They determined that there was meconium in the water, meaning that the baby had had her first bowel movement. At that point, they were worried that she might have aspirated some of it, which could cause complications. Having done a LOT of reading, I knew that most of the time, this resolved just fine. They called in the pediatrician to stand by and warned us she might not cry for a few minutes. They told us not to worry. I was feeling a lot of pressure and they were nagging me to push, so I was more irritated than worried.

By 5:56am, she was born screaming. No complications. She was 6 pounds and 15.5 oz, so they rounded up to 7 pounds even. She was 18.25 inches long. Tom cut the cord, took some pictures, and brought her over to me to hold for the first time. I was still in shock. One minute I was in excruciating pain and the next there was a baby in this world and she was mine and Tom’s. We attempted to feed her for the first time and both broke down in tears. She was so beautiful and sweet and we couldn’t believe she was finally here or that she was the same little creature who’d been kicking me and giving me heartburn for the last few months.

The first night at the hospital was really tough. She wouldn’t sleep and I was struggling with my milk having not yet come in. I didn’t want to have to formula-feed her, but until my milk comes in, that’s exactly what I have to do. I was also in a great deal of pain and not feeling up to doing much. Tom was wonderful, getting up to hold the baby and giving her to me when I asked, taking her from me when I was getting overwhelmed, asking me if he could help me and not badgering me with “ARE YOU OK???” constantly. (He asked, just not too much.) We waited around til about 11am on the 12th, then they finally let us go home.

Once we got home, everything changed. We were relaxing, we were comfortable, baby girl was sleeping, she was eating well, and we were just happier in general. We took long naps ourselves, having gotten almost no sleep since Saturday night. Thursday the 13th, we had an early doctor’s appointment for the baby. We were feeling rested and happy. The nurses and doctors cooed all over her and the outfit we had her in. She had already grown 3/4 of an inch and had gained back her birth weight. (Babies typically lose 10% of their initial birth weight in the first two weeks.) She got a perfect bill of health.

Last night was a bit harder. I was in a good amount of pain still. She was hungrier, less amenable to her pacifier, and a little cranky. We finally got a decent amount of sleep between 1 and 4 am. And even when she’s crying her little eyes out, she is the cutest, sweetest thing I have ever seen in my whole life. Tom is such a good daddy. He’s been doing a LOT of the work because I haven’t been able to move around a whole lot. He does it with a smile and an appreciative chuckle at our daughter’s little mannerisms. He helps me with everything I ask without complaint. He takes time to kiss me and tell me he thinks I’m beautiful, that I did such a good job giving birth to her, that he loves me, that he’s so happy, to express concern over how I feel, etc. I have a perfect little family and I honestly could not be happier. All the apprehension and worry I had the first night at the hospital has dissipated. And she is everything I could have hoped for and more. 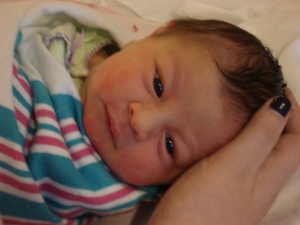 I am a Paralegal at a small criminal defense and personal injury firm in my small town. I graduated from Western Washington University with a BA in Political Science and Philosophy. I have my Paralegal Certificate, as well. I write a blog in my spare time. I am married to a wonderful man and recently gave birth to a beautiful little girl. END_OF_DOCUMENT_TOKEN_TO_BE_REPLACED
This entry was posted on Friday, March 14th, 2014 at 9:13 am and posted in Childbirth, Family. You can follow any responses to this entry through the RSS 2.0 feed.
« Not Their Area of Expertise
Parenthood: Day 4 »

3 responses to “The Birth Story”

The Stuff of Legends

Personal Musings and Objective Critique of The Legend Of Zelda.

Photographs from my world.

My Days in Focus

A photographic journal by Dan Miller

the hook: on brands and media

"To swear off making mistake is very easy. All you have to do is swear off having ideas. " - Leo Burnett